A Couple of Pics

My schedule has been terribly busy but I made a pledge to set aside two hours a week to blog and keep the website updated.  We’ll see how well I do at that but it’s a start.  It looks like WordPress has finally made some improvement to how photos are uploaded so that should make it a little easier.  Part of being able to keep up on the blog was really derailed by the need to spend 4-5 minutes editing each photo before it went up.  6 photos was 30 minutes before a word was even written and then try to get them set right on the page was another 15 minutes.

Anyway we’ve been pretty busy, me with the day job and Stefania keeping the winery and vineyards humming along.  We did just recently complete a bottling of our first 2012 wines.  We bottled our 2012 Pinot Noir and 2012 Chardonnay.

Below the Chardonnay barrels are drying before being sterilized.  We had already put the wine in tank for cold stabilization.

After cold stabilization the wine is filtered.  We rarely filter red wines but do filter the Chardonnay.  That makes it a big challenge to remember how to set up and run the filter since we only do it once a year for an hour or so.  Last time we did it though Stefania took pictures of the set up which she taped on the walls for us to view as we set it up this time.  The filtering went very easy.

This is the kind of stuff most wineries don’t want to show but being honest about production is not something we ever shy from.  This is the ‘gunk’ at the bottom of the tank after filtering.  Mostly it’s dead yeast.  For a red wine this isn’t such a big deal.  We rack a few times to get as much of this gone as we can but some will end up as sediment in the bottom of the bottle.  In a white wine though it looks a little sludgy to leave this stuff behind. 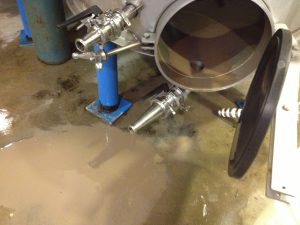 One final unrelated picture.  This Saturday at 5 PM we will be at the Silicon Valley Roller Girls bout http://svrollergirls.com/  We are the official wine sponsor and they will have our 2009 Chardonnay and 2010 Crimson Clover Cabernet by the glass.  Hope to see you there. 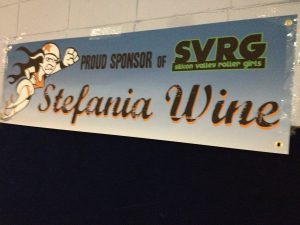