Dinner at Our Place

Every year we make a donation to the Washington Open School in Santa Clara. Usually we do a case of wine or a couple of magnums. Last year they asked if we could do something bigger so we offered a wine dinner at our home. The package was a four course dinner paired with our wines and we were told it brought in a huge bid. We had the winners over on Friday night and Stefania prepped the house and dinning room.  We’re still trying to figure out what art to put in the living room so for right now the chalk boards to track football scores are in the space along with the banner for the Roller Girls. 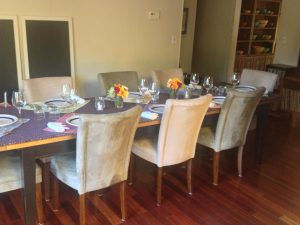 We started in the living room and bar with some fresh fruit and a selection of cheese.  I opened our unreleased 2010 Chardonnay and the just bottled 2012 Chardonnay.  We wound through the what would be five courses and a dessert on the patio about 11PM.  I started with a Caesar salad with grilled shrimp.  Then Stefania had a soup and I followed that with lamb chops over cabbage and mushrooms in red wine.  I added a few slices of home made sausage to the plate.  We finished with Filet Mignon and summer squash. 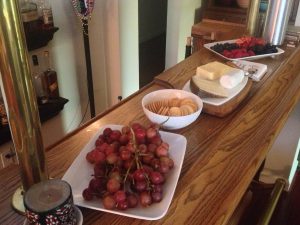 We put a dent in the wines working through some unreleased wines and some from our library.  I though the 2011 Nueva Casa de los Padres was the highlight.  The 2006 Uvas Creek Cabernet Sauvignon was also really good and I was surprised that the 2012 Chardonnay wasn’t showing any bottle shock.

We really enjoy putting together dinners.  Charity events are a rarity but for friends coming into town it’s something we try and pull together.  It might not always be as many courses but it will always be something good!