2008 January in the Vineyard

Has it really been over ten years since we pruned over 20 acres with our small crew, on weekends and while working full time at real day jobs? Oy!  I do miss it, and we have plans to help our friends that currently own vineyards but…I’m not in any hurry (at my age) to recreate this adventure from scratch again.  Been there, done that, still don’t have a t-shirt.  We bought the property in Gilroy with the intention of planting the back half with vines.  We’re heading in to our fifth year here and have all but abandoned the idea of grapes.  Why? There’s a lot of the “been there done that attitude”, mostly mine, there’s the necessity of deer fencing even more of the property which kind of ruins a lot of the aesthetic that is here now, and finally the watering logistics come in to play.  We bought the property with a dry well so water is an issue.  Although we came up with a very functional and affordable workaround for supplying water to the proposed vineyard site, see above.

Add to that our ages, old and older (not really, but let’s play with that for a moment). At say, 50 years old, plant a vineyard, have the first real estate harvest by 54, barrel age for another couple of years, hang on to it in bottle for another 6 months to a year to release the wine…well, you see where this is going fast, no where.

I scoured the back up hard drive to find these photos from 2008, the Woodruff Vineyard in Corralitos.  This was before I had a telephonic smart device with a built in camera so the photos were rarely taken and on a 5 megapixel camera at that.  That’s our friend Wes in the yellow shirt.  He’s off on his own winemaking adventure now and doing very well with it! 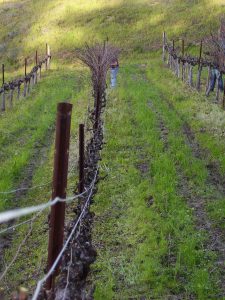 This was one of my favorite shots from that day, the long row, nearly completely done and our friend Dave working away on the last few plants in that row. 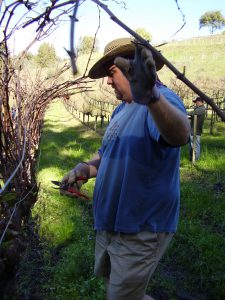 An action shot with Paul tossing the cut vine my way and the clippers ready for the next cut.  The vineyard was Pinot in the section where these photos were shot and Chardonnay on the other side.

Some of my favorite memories of working in the vineyards were during pruning.  Most people would think that harvest is the most exciting time, and it is, but there is also a lot of stress during harvest.  Pruning on the other hand is leisurely and therapeutic.  It’s a reason to be in nature for several hours in a row while your mind is focused on nothing but the task at hand.  All thoughts of the day job, the housework, homework, etc are far away.

One time, at Chaine d’Or, we were there on a Saturday and the sun was extremely high, the skies exceptionally clear, and I could feel myself getting sun burned. I cursed the heat and the high sun and said I would need to remember sunscreen and a larger hat for the next day.  Well, the next day was literally freezing cold, gray, and overcast bordering on miserable and right at 3 o’clock it began to snow on us. I said, that’s it, I’m done for the day, pack it up, we’re going home.  Luckily we were nearly done and needed one more trip back up the mountain to finish.

The vineyard in these photos was not 20 acres, at the time, we were managing several properties, in Woodside, Los Altos Hills, Portola Valley, Bonny Doon, Corralitos, San Jose, Coyote Valley, Saratoga, and Monte Sereno. I think I captured them all, I always forget one or two.