We had a few things to catch up on yesterday and hit the road by 8 AM. We started with a visit to Vista Verde to check and see how Rachel is doing with her work. She had also reported seeing a deer so we needed to check for damage and see if we could identify the deer’s feeding path.

First up though was to turn off the drip system. We’d had it on for the last couple of weeks to get 25 new replacement vines started off. The new vines need the watering to get going and established. Not a lot of water though, it was just 20 minutes on the dripper, two times per week.

We found the deer damage pretty fast. It looks like one deer, coming in through some hole in the fence and moving down the vineyard to the creek. I’ll have Jerry look for the hole and see if we can’t patch it. We’ll also put up deer repellent on Monday. I’ll use fabric softener/dryer sheets again. Rachel will staple them to the end posts of the vineyard and on the upper section of the fence where the deer is getting in.

The soap smell is so intense to deer that they will avoid the area. Basically deer are creatures of habit, they follow the same path and feeding routes. What we’ll try and do is make the vineyard smell so unpleasant to him that he modifies his path and moves through another yard. It shouldn’t actually be too hard with the number of other feeding possibilities he has in the neighborhood.

Then we were on to Chaine d’Or. I’m planning on turning on the drip system here also. Problem is it hasn’t been on in a couple of years so it will need some work to unclog hoses, fix leaks, and repair broken drippers. My plan is to turn it on for a long soak. A single run of 4-5 hours which will mimic a summer rainstorm. Since it’s our second year of low rain, I’m figuring the plants will need the extra water. If we need to we will repeat the process again later in the summer.

This was the vineyard as we arrived. It’s one reason this vineyard is so great. The sun is already shinning on the vines, but you can see the fog in the background, keeping the area cool and preserving the acidity in the grapes. 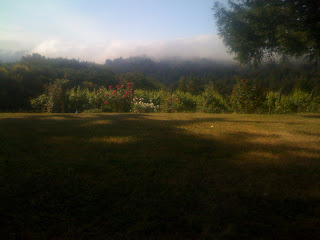 We had Rachel cleaning the filters through out the system, which means a lot of time sitting on the ground. Stef and I tended to gopher trapping. It was just a couple of hours of work. Stef will return on Monday to patch broken spots in the system. As we walked the vineyard she made a list of the repair parts we’ll need to buy today.

By Noon the vineyard was in bright sun, but the fog still hung around the edges. 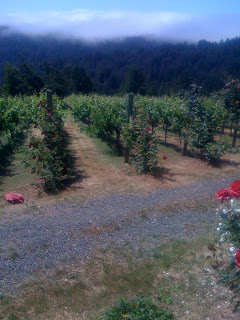 This also gives us a super long growing season. Grapes need 100 days from flowering until harvest. Normally after 100 days the sugar gets so high that waiting longer than that will drastically increase the alcohol in the finished wine, and drop the acidity. That can make the wine flabby and ‘hot’. Here we’ll hit the 100 day mark around September 20th, but we won’t actually harvest until the last week of October. That gives us almost 40 additional days. The fog will keep the vineyard cool though and both alcohol and acidity will remain solid as the flavors in the grapes keep developing.

We wrapped up the day topping barrels in the winery and checking on the progress of our 2008’s. It was a good chance for Rachel to taste the effect her work will have on the finished wine. We headed home pretty early at 2PM to have some friends over for dinner.