By now this is a really familiar picture. Start of the morning in the FJ Cruiser.  I was up at 5:45.  Crimson is not far from our home compared to some other sites so leaving at 6:37 we were actually the first ones on site at just after 7AM.  Millie had come the day before and removed all the chopsticks from the netting so the first task would be to remove the nets.  Normally we’d have Jerry and Gil remove the nets and everyone else would start picking.  The weather was drippy and wet though with mist coming down and clouds all around the vineyard.  I kept checking the hourly weather update (which showed clear from 8 Am until Noon) and watching the clouds.  Everyone pitched in to take the nets off. 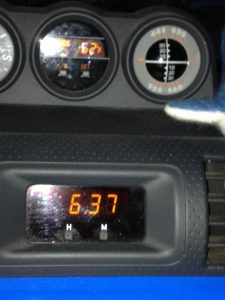 There was a little moister on the leafs but the clusters where staying dry.  They really looked fantastic.  We don’t generally leaf pull.  I prefer to get dappled sunlight on to the grapes rather than direct sun. 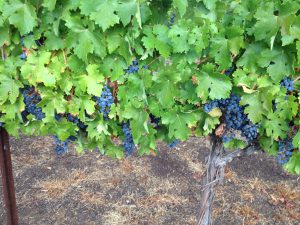 About 8:45 we got the clearing that we needed in the clouds and I sent the crew out to start picking as fast as they could.  Clouds hung around the vineyard all morning but as volunteers arrived on site they all said it was clear to the north of us, the direction any rain would come in from. 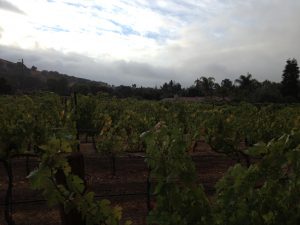 The first bin of grapes.  I picked about six bins total.  Once the bins started to fill up though my job changes to picking up the bins and carrying them to the macro bins for sorting.  Stefania calculated that I walked 12 miles in the vineyard, half of that carrying 30 pounds on my shoulder.  In all I carried out over 100 bins on Saturday and over 60 on Sunday. 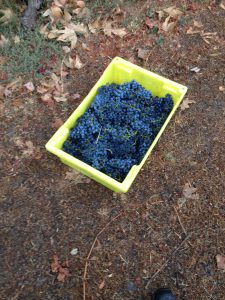 This is Stef’s usual job on picking days.  She’s keeping a tally of the bins as they come in and sorting through the grapes removing any bees, spiders, lady bugs, earwigs, leafs, shoots, grass, water bottles or finger tips that come in.  We had a good pick this time with no injuries or bee stings. 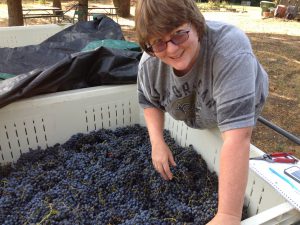 I thought we might pick heavy this year.  Last year we brought in just under three full bins or about 2700 pounds.  That’s 1 1/2 tons per acre and pretty normal for this site.  I thought we would get 4 bins this year.  That’s a little bit of a logistical challenge because the biggest trailer I can rent only hold three bins, and I wouldn’t want to tow much more than the 4000 pounds a fully loaded rig weighs up and down the mountain roads we have to travel.  I figured we’d just come back Sunday though and finish up.  The third bin though filled up on row 12 of 23.  Rows 18-23 are shorter than the rest so we actually came back for 2+ bins on Sunday or just over 5000 pounds. 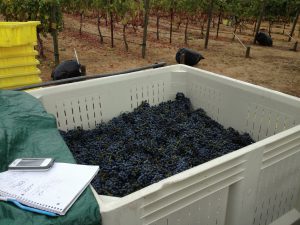 There was some drama driving back to the winery.  The forecast held and at Noon it started raining again.  We had covered the bins though and were already on the road when the rain started.  When we arrived at the winery we had to weight about 30 minutes for the misting to stop.  We then got everything processed and inside in just about 25 minutes, which was perfect because 5 minutes after we finished processing it rained as hard as I’ve ever seen at the winery. 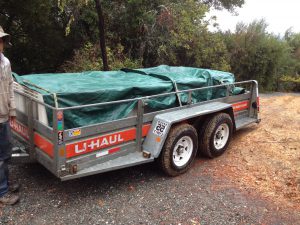 We ended up with three full fermentation bins of must.  That’s a thermometer sticking in the must getting a temperature.  Brix was 14 and pH 3.80.  Reallly perfect for this vineyard. 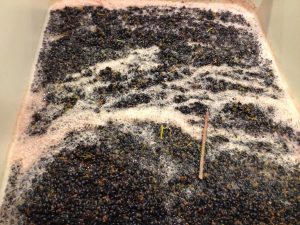 We were out of the winery in time to get home and take a shower and visit our friend Ingrid’s house for authentic Chinese food.  The ‘pearl’ sausage balls were fantastic and there was a pot of ‘blood and guts’ that I really enjoy.  We probably drank too much and ate too much and stayed to late given we had to get up Sunday at 5:45 again but it was fun.

Sunday we returned and picked the rest of the vineyard as well as the Cabernet from the Roxy vineyard a block down the road from Crimson Clover.  For the first time there looks like enough grapes from Roxy (about 800 pounds so far) to do a barrel on its own.  Usually it goes into the Haut Tubee blend.  Sunday was one of those really tough days.  At 1 PM I had to stop picking and hauling grapes and just sit in the car for about 30 minutes to recover.  When we made it to the winery at 4PM with the grapes Millie was not there yet.  We’d sent her to pick up some sandwiches so knew we had about 30 minutes before we had to process the grapes.  I took my boots off and put them under my head on the cellar floor and fell asleep.

We ended up staying until just about 8PM.  The Chardonnay was ready to go into barrel so while Millie and crew cleaned up outside, Stef and I got the barrels ready and all the wine transferred inside.  Sunday’s dinner was traditional harvest food – beer and pizza.