A Simple Thursday at Home

I’ve gotten pretty good at the Ranch 99 routine since I first wrote about it. Stefania asked me last night; “Do they recognize you yet?”. I said: ‘no’, but had to rethink that. True – I’m only in once or twice a week, but generally I’ve been the only 6’4″ white dude holding up a whole fish. Probably at least a little memorable on the staffs part.

Yesterday I selected two really nice Sea Bream’s. Stef had a special request “I want my own fish tonight.” So I picked up two and had them scaled and cleaned, but left the heads and tails.

It was a really simple preparation. I stuffed the fish with some fresh ginger and herbs de Provence from our garden. We planted the herbs because they grow so well here and go so well with our wines. Then it was just 7-8 minutes on each side on a hot grill. 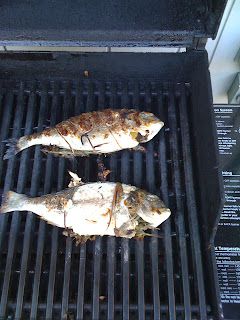 Stef made the same spinach salad we had served this past weekend, and I rounded things out with some corn on the cob, and a stir fry of zucchini, sweet onion, and some snap peas from my mom’s garden.

We opened a 2004 Windy Oaks Chardonnay to start. This was full throttle and oaky, with honey, wax, and nut notes. We then went on to a 2006 Sea Smoke Ten. It had a nice core of red fruit and spicy notes, but wasn’t as extracted and ‘thick’ as past Ten’s have been.

We lingered in the backyard for a long time, finally heading in after sun set about 9PM. I really great night at home.