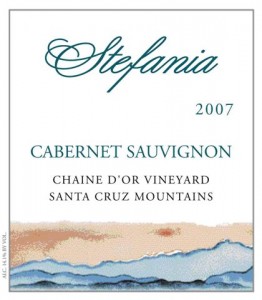 I’ve just put up the details on our Fall Release:

We have 4 wines we’re releasing, two of them brand new.  Offer letter will go out to Mailing List Members this week.  Anything left will be available for web orders on October 31st.  I’m particularly excited about the Mourvedre.  It got great reviews in Chicago where we opened two bottles in August.  We do have a Chardonnay from 2012 but will be releasing that as well as our 2012 Pinot Noir in the Spring.

Saturday was a cold and rainy day.  We headed up to the winery for a long day of work inside so at least we’d be mostly dry.  We still had 15 barrels to get through the first racking and sulfuring of the year.  Malolactic fermentation has been slow this year and 5 different lots were just finishing up.

We can’t add sulfur to the wines before Malo has completed or the sulfur will kill the Malo bacteria along with the bad bacteria.  The longer we go though the greater the risk of those bad bacteria showing up so it’s been a tense few months.

Stefania started by setting up her lab and I got the pump, tanks and barrel cleaner ready.  We had lab results back from the lab we have to do our government testing with so we didn’t need to do much in the way of actual measurements, but we would have to prepare SO2 for every wine and Tartaric Acid for a few.

One routine we always have is that a second person must verify that the pump is hooked up right and all the seals on the tanks are closed.  This helps prevent oversight and shooting wine all over the place.

We had five different lots to work with; Crimson Clover Cab ,Harvest Moon Cab, Coastview Syrah, Mourvedre and Haut Tubee.  Everything would get an SO2 treatment of 40-50 ppm depending on the pH of the wine.  The Mourvedre, Harvest Moon and Haut Tubee would also have Tartaric added to lower pH.

We combined some of the Crimson Clover Cabernet, with some Peacock Cab Franc and a little Harvest Moon Cab to start a Santa Clara Valley Cabernet blend.  The rest of the Harvest Moon and the Haut t was kept on its own for now.  We finished up the day about 5PM by filing the tanks with Coastview Syrah in tank #1 and Mourvedre in tank #2 and left them to settle for the night.

We returned the next day to get those wines back in barrel and spent just 3 hours compared to the 8 the day before.  We started our GSM blend by putting some of the Syrah in with some of the Mourvedre, but kept two barrels of each on their own.  In the end we had 14 barrels and topping wine.

Each barrel is rinsed and cleaned as part of the process on the barrel holder below.  The holder allows the barrel to spin and Stefania usually does this job.

I was really happy with the Mourvedre.  Our original plan was to blend all of it into the GSM blend or the Haut Tubee, but we may keep some on its own.  The other wines were all good as well, and I’m excited about the final wines.  After a rough weather year last year it looks like we still ended up with good wine.

We’ve had a couple of years where the last task of the year was on Thanksgiving weekend. Usually we had one small lot to get into barrel. This year our last task was yesterday. We had two lots to go into barrel which ended up being 40% of our 2011 production.

Stefania and I have a lot of blogging and picture to catch up on. Now that we finally have some down time we’ll try and get those up over the next few weeks. Today we have a pig in the Caja China for Millie’s birthday and lots of great wine planned for tonight. It feels like an end of harvest party and I’m enjoying it!

It’s raining in Northern California.  You may have read newspaper articles about the rain or even seen the occasional TV report.  Those reports usually give an air of panic and desperation as wineries try and rush in grapes before they are ‘ruined’ by the rain.  Hooey!

We had been scheduled to pick the Haut Tubee vineyards tomorrow, including Red Hen, the Church, and Home vineyards but I just sent a message to Millie and we are postponing until Tuesday.  We’ll still go on with Crimson Clover on Sunday as we have 2 days of sun coming and that will be enough to dry out the grapes.

Then what’s next?  Do we panic and bring in all the Cabernet out there before it rains again?  No, we go to New Orleans for a week to avoid all the panic going on.  The Cabs will be ready after October 20th from our testing.  Some vineyards will actually be ready around the 31st.  That’s normal for us, the warm September helped get us back to normal, so it’s best to stay calm and wait it out.

Saturday morning we were out for our fist harvest of the year. I took the traditional photo of the time and temperature from the FJ Cruiser.

This next photo is also a traditional stop for us now.  Sam’s Donuts around the corner from our house.  We get a dozen donuts or so for the crew and volunteers.

The vineyard we harvested is new for us this year.  It’s the Brauns or Under a Lucky Star Vineyard.  There are 400 Pinot Noir plants above Los Altos in the Santa Cruz Mountains.

We arrived on site just as the sun was coming up and the crew had already started working.    In 2005 we tried harvesting earlier in a couple vineyards using lights.  This sounds really cool and is trendy, but I figured quickly it’s a complete waste of time.  The crew moves at about 50% of normal speed and you end up having to go back through anyway and get what you missed when the sun comes out.  All we really accomplished was sleep deprivation and a higher risk of injury so we don’t do that anymore.

We used the ‘A Team’ for this pick since it was out first time in the vineyard to harvest.  Jerry, Gil, Estella and Ysidro made up the professional crew and we had Wes, Ingrid, Joan and Ron come as volunteers.  Everyone picking was an experienced picker.

Picking went very quickly and we were done well before 9AM.  Total harvest was just about 900 pounds which is the most ever for this site we were told.  There had been animal and bird issues in the past.  We used a double netting system and sealed the net bottoms with chop sticks as we normally do.  This is different from most vineyards but we’ve learned this method is key for our suburban vineyards.

The fruit looked excellent and I took the picture below of the soil in the vineyard.  Stefania and I love this red volcanic dirt.  There’s a small band through out the Santa Cruz Mountains and grapes do very well on it.  The same band also cuts through Crimson Clover.

It took just about 25 minutes to get to the winery and then only about 10 minutes to process the fruit.  There was a little drama with the pump that I had to tend to and then the winemaking so I didn’t take any pictures of the actual crush.  Stefania took readings and the numbers were Brix 23.9, pH 3.7 and TA .61.  Really great for a first time in this vineyard.

The juice went into a single bin and will ferment on native yeast.  We used 1/3 whole clusters and I’ll only do two punch downs a day to avoid getting to much tannin extracted.  We’re really excited about this vineyard and wine.

Early in the year there was a great deal of talk about the weather.  It was a cold and very wet spring.  We had unusual rain in May and June.  There was concern for the harvest this year.

The basic rule about the weather is that the spring effects quantity, summer effects the harvest date and fall effects quality.   The wet cold weather in the spring did effect quantity for us.  In our higher vineyards like Chaine d’Or we had really poor fruit set and quantities will be way down.  At another high vineyard, Split Rail, the quantity was effected so much that we won’t harvest any grapes this year.  The other lower vineyards will have smaller than normal yields but not as drastic as the high altitude vineyards.

The summer started cool, and we’ve not really had any heat waves.  I took the picture above from the top of Communication Hill in San Jose.  It should look familiar, it’s the same view you see on our labels.  That’s what summer has looked like all year.  Fog in the morning, sunny during the day, with highs in the 80’s.  That’s perfect.  Too hot and the grapes will shut down, too cold and sugars will not develop.

So far quality looks really good.  We’ve had clean vineyards for the most part with mildew pressure only in the higher vineyards.  The clusters and berries look good.  A few more weeks of weather like this and we’ll head into fall in really great shape.

There’s still alot that could go crazy.  Too much heat, rain at the wrong time, or a number of other things could effect quality.  If, and it’s always a big if, we have a normal fall though we should be looking at an excellent quality, low quantity year.