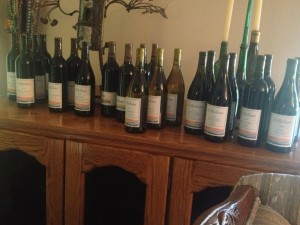 Every year we make a donation to the Washington Open School in Santa Clara. Usually we do a case of wine or a couple of magnums. Last year they asked if we could do something bigger so we offered a wine dinner at our home. The package was a four course dinner paired with our wines and we were told it brought in a huge bid. We had the winners over on Friday night and Stefania prepped the house and dinning room.  We’re still trying to figure out what art to put in the living room so for right now the chalk boards to track football scores are in the space along with the banner for the Roller Girls.

We started in the living room and bar with some fresh fruit and a selection of cheese.  I opened our unreleased 2010 Chardonnay and the just bottled 2012 Chardonnay.  We wound through the what would be five courses and a dessert on the patio about 11PM.  I started with a Caesar salad with grilled shrimp.  Then Stefania had a soup and I followed that with lamb chops over cabbage and mushrooms in red wine.  I added a few slices of home made sausage to the plate.  We finished with Filet Mignon and summer squash.

We put a dent in the wines working through some unreleased wines and some from our library.  I though the 2011 Nueva Casa de los Padres was the highlight.  The 2006 Uvas Creek Cabernet Sauvignon was also really good and I was surprised that the 2012 Chardonnay wasn’t showing any bottle shock.

We really enjoy putting together dinners.  Charity events are a rarity but for friends coming into town it’s something we try and pull together.  It might not always be as many courses but it will always be something good!

One of the things that Stefania and I do twice per year, usually after bottling and harvest, is rate all of our vendors.  There are usually somewhere between 15 and 25 vendors that we rate.  We give everyone a grade from A to F.  A’s and B’s we keep.  If there was a reason someone got a B we make sure we communicate what we want to be done better next time.

C’s and D’s are on notice.  We tell them that we are unhappy and why.  We also tell them that we’re looking for alternatives and unless they improve we will replace them.  We end up replacing a lot of C and D companies.  They reason they get those grades is usually systemic to the company and not a matter of a few correctable items.  F is for fired.  We do give F’s and we do have vendors we won’t work with anymore.

So what in the world does this have to do with me and a sledgehammer?  Well we finally got the budget to break out the old cement slab in the backyard as the first step in installing a redwood deck.  Stefania and I did all the demolition with heroic help from our friend Eric.  A few people asked: ‘Why don’t you just go down to Home Depot and hire a couple guys?”  Well I thought about that, and I also thought my dad never went out and hired guys when I was a kid, he did it himself with a friend or two.  It occurred to me later that when I was a ‘kid’ my dad was 27 not 45.  No wonder he never needed to hire a couple guys.

The previous homeowner here we lovingly refer to as “F…in Jackwagon” had some surprises in store for us as we demolished.  Re-bar sticking out of the foundation, a buried 1/2 ton cement block (why dispose of properly when you can bury it???),   an unsteady pour of cement that went from 4 to 10 inches thick and my favorite a McDonalds soda cup circa 1967 embedded in the cement.  In all we hauled out by wheelbarrow 6 cubic yards.

It’s where we hauled it to that brings me back to the vendor list.  One vendor we’ve used now since 2009 is Steve’s Hauling.  We use Steve to take pruning out of vineyards and haul away any other debris we have from site construction or maintenance.  We call, give him the address, tell him what we need done, and he does it and sends a reasonable bill.  Every year we’ve given Steve an A+.  We used him again for this job and once again an A+ job.  Steve Stone – Steve’s Hauling 510-719-2994 A+!