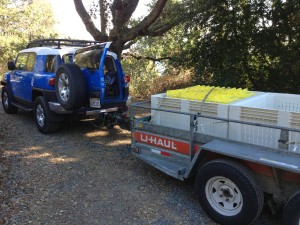 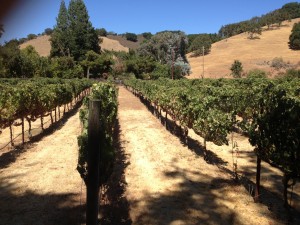 I wrote about the visit and testing at Chaine d’Or we did on Saturday.  We also visited a small Syrah vineyard in Los Altos Hills that the owners now maintain all on their own and visited a potential new site in the Gilroy-Watsonville Road area.  For those out side of the South Bay, Gilroy and Watsonville are two small towns south of San Jose.  The irony of the Gilroy-Watsonville Road is it goes to neither Gilroy or Watsonville.  We finished up the day at the Crimson Clover vineyard which is in the town of Morgan Hill behind the big hill everyone things is named Morgan Hill but is really named El Toro.  Whoever named things in that part of the valley was definitely trying to confuse people.

Sunday we watched the Saints game in the morning.  They seem to have their defense figured out this year which was encouraging.  Then we headed to the Mineral Hill vineyard to watch the 49er game with the vineyard owners there and check on the grapes.  This will be a hard one to figure out when to pick because the vines are just three years old and a vineyard that young tends to have a great deal of variation from plant to plant.  Stefania says it’s really year 7 when the vineyard starts acting like a vineyard, and stops acting like a collection of individual plants.

The grapes planted here are Mourvedre and the yield looks to be pretty high.  I’m sure some of the clusters won’t make it and will dry up and some will not be ripe and have to get cut off so probably 75% of what is on the vine now will make it into a fermentation bin.  The vineyard is over an ancient creek bed and water still flow under ground so the plants are particularly strong for being three years old.  I’m thinking we will pick here right around the 1st of October.

One last picture from Crimson Clover on Saturday.  The vineyard tested at 22.25 Brix.  Flavors are well past the green state and in between red and black fruit.  We set the pick date as September 21st, which is in the normal to early range for the site.  With the weather pattern we expect to pick right around 24 Brix.  Yield here looks average for the site and I think we’ll get just under two tons.  We will also pick the ‘Roxy’ Vineyard at the same time.  Roxy is a mix of Syrah, Zinfandel and Cabernet Sauvignon that we put in the Haut Tubee Blend.  Yield there looks high this year, close to a 1000 pounds.  That would be cool actually if we got that much as we could keep the vineyard on it’s own through fermentation and into barrel.