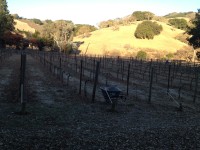 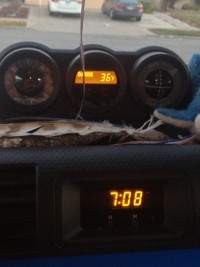 It’s been cold for California this January.  It is a time we have to be outside a great deal.  We probably spend more time in the vineyards in January than any other month of the year including harvest time.  As long as it is dry though it’s not bad to work in the cold.  We just bring lots of layers and we actually stay pretty warm as we work.

Pruning is the major task in January.  We will also do maintenance on the trellis systems though as well.  It’s a good time to replace any broken posts and repair any damaged wire.  One big task for this January has been changing the pruning at Chaine d’Or.  Over the last few years the yields on the Chardonnay plants has gone way down.  The plants are 25 years old now and that is the point when yields do drop.  The drop though has been dramatic.  Some plants had only 4-5 clusters per plant instead of the 20-25 we’d expect.

Last year I spent some time researching the issue and after a lot of reading wondered if we should use the Guyot training method instead of the Cordon and Spur method we were using.  In Burgundy on old plants they use Guyot and I thought there must be some reason, although I could not find anything specific about yields.

I selected about a half dozen plants last year and pruned and trained them in the Guyot method as an experiment.  The results by the end of the year were dramatic.  At best on the Cordon and Spur training we saw 8-10 clusters per plant and the average was about 6.  Some plants had less than 4 and many only had 1-2 clusters.  All the clusters were very small as well.  With Guyot training cluster sizes were 50% larger and we had at least 12 clusters on every plant.

We decided to change over the entire vineyard starting this year.  We did about 40% of the lower section.  We chose plants there based on the position of the canes and overall health of the vine.  If we could make the conversion we did.  If we couldn’t we left the plant for next year.

In the upper section though we did a 100% conversion.  In the first step Stefania and Millie went through the vineyard and removed all of the canes from the plant except for 2 or 3 closest to the center of the plant.  The goal was to end up with two left, but they often left me 3 so I had options on where to cut.  Below is an example of what the plant looked like after they went through.

I spent a lot of time with the chain saw.  The cordons are too thick to remove with pruners and have to be sawed off.  It’s a delicate thing to do.  I have to make sure not to cut the canes we want to leave, or too much of the plant off.  I also have to avoid hitting the wire with the saw, which is hard because the cordons rest on the wire.  I ended up cutting the wire once and bucking the chain of the saw about 5 times.

Once the Cordons are off the plant looks like this.  Herrardo followed me around as I cut and removed the wood from the vineyard.  He’d also replace the chain when it came off.  With the amount to be cut I’d switch chain saws every 30 minutes or so to let one cool while I worked with the other one.

The final step is to pull down the canes and tie them to the wire as you see below.  In this case I was able to leave one renewal spur for next year.  In the Guyot method you have 4 canes total on the plant.  Two are pulled down and two are cut to two nodes to provide canes for the next year.  In our situation though we had no plants yet with 4 canes in the right position so we’ll do the step of having renewal spurs next season.

Normally such a dramatic change, and the missing renewal spurs would mean a huge drop in yields.  Since yields were already so low though we thing we might actually have more Chardonnay this year than last.

Tuesday we drove up to the Los Altos Hills after work to drop off some grow tubes and check on our Pinot Noir Vineyard.  This small vineyard has just about 800 plants and should produce about a ton of fruit from us once at full production.  This was our first vineyard to have bud break this year and the plants were pretty far along in growth.

Stefania, Millie and I did all the pruning this year.  There were some spacing issues I wanted corrected and I though many of the plants needed new cordons as they’d been pushed too far too fast before we took over the site last year.  We went through each vine very carefully to get it pruned with the focus on strong plant this year.  So far the growth looks really good.

The vines need some suckering and thinning.  Stef and I will do that ourselves also so that we know the plants are trained exactly how we want them.  We both felt there was too much green growth and too many shoots left last year so thinning will be a key.  The vineyard layout is good but it is ‘busy’ compared to what we normally do.  Stef likes a clean simple aesthetic in the vineyard and this one had a lot of extra clips, stakes, holders and tape.  We try and avoid using those items.

It might be hard to spot below but if you look closely you’ll see lots of green tie tape on the plants.  Each plant is also staked and tied down to the stake.  I put up a picture of our front yard vineyard as a comparison.  Notice that there is no tie anywhere and no extra metal or plastic in sight.  It’s something small and subtle but it gives the vineyard more of a natural feeling versus looking like a ‘metal and wire garden’ as Stef calls them.