The Picasso image was taken at the Art Institute.  It’s from the “Original Etchings for the Texts of Buffon” display, and dated 1936.  I liked that he captured the grapevine, leaves, clusters, and tendrils so completely.  I also snapped a couple more photos from that particular grouping and a handful of other very colorful paintings of his.  I’m not sure yet how I feel about the folks with iPads snapping photos of all these famous works…I think it’s great we can share art across many mediums, and although it wasn’t really intrusive, I wanted it to be rude and it wasn’t.

Thank you Windy City for blowing my hair all crazy on our walk over to the Art Institute.

That’s Mrs. Oleary’s cow, they blame the cow for knocking over the oil lamp that burned the city down (that’s my quick summary about the cow). It’s actually a horrible story, a lot of people were killed, and miles of the city were destroyed. 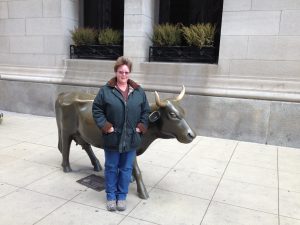 Another Picasso etching, I’m a Capricorn and have a thing for goats and goat art…

Paul took me to a Cubs game.  It was cold.  We drank beer and ate hot dogs.  It snowed.  The Giants won.  I’d like to publicly thank our friend Allison for suggesting we take blankets, they saved our frozen butts.  Did I mention it snowed?  At noon, at a baseball game, in late April.  Snow.

We met friends at Caro Mio in Chicago, a lot of friends actually.  I’m not sure I could begin to describe the scene, but for 20 people, there were easily twice that many bottles of wine that we opened.  The food was family style Italian and perfect for the event.  Good Food, Good Friends, Great Wine!

We did get to showcase our latest release and some of our previous vintages for newcomers to try.  Only a handful of new faces this time, we are becoming regulars to Chicago and getting to be very close friends with more folks, this winemaking gig has been a lot of fun, I won’t lie.