The garden had a little bit of frost/cold damage that got to the potato plants.  They are recovering now and everything else is doing great.  I also lost seedlings in the cold so will have to restart my tomato plants and herbs.    I harvested a leek and a few asparagus spears so far.  The lettuce and swiss chard is just about big enough to make a micro green salad or two for us also.

I put in a couple of strawberry plants and I’m making a second try at artichokes.  The first try I started in the clay soil and they did poorly.  This time around I’m starting them in the planter boxes and will move them to the ground when they get mature enough to deal with the heavy soil.  Since an artichoke is permanent I don’t want to leave it in a planter box. 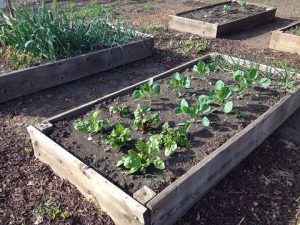 I should have put these crash pictures up originally of the front yard but I think they were on my work phone and I didn’t have them to upload when I did the last blog.  The front originally had a group of very mature chestnut trees and oleanders along with other trees and shrubs.  There were also some pretty pitiful grape vines on a rickety old trellis.  I removed the vines and trellis right away.  Anyone who would have seen the condition of those vines and trellis would have thought there was no way we know what we’re doing. 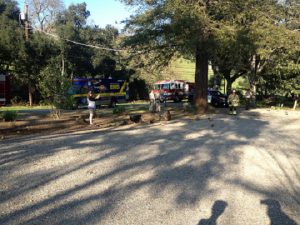 This is the car in the driveway crashed into an olive that I’d cleaned up earlier.  It stopped about 100 feet from it’s original impact and flip over point.  One large boulder (about 150 pounds) ended up in the creek 200 feet from where it started.  You can trace the impacts as it skipped across the yard. 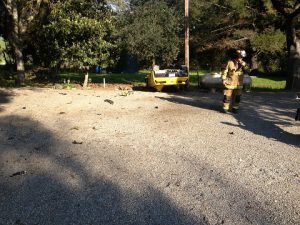 I wanted to get these up so I can put up some after pictures after all the work we’ve done to repair things up front.  There are new trees and shrubs and strategically located 6x6x6 posts, which will also form a fence and eventually gate.  We put in a lot of reflectors also to provide some visual warning as the plants mature.  I should be done with the first round of work this weekend and just have the fence and gate left to do.