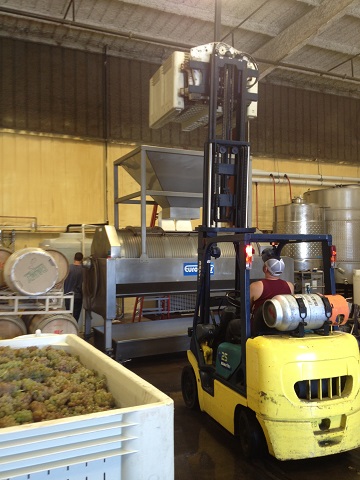 Our first harvest was in 2005 and we took our grapes to Crushpad which was then in San Francisco.  I worked there too as a volunteer a few days a week in addition to doing our own winemaking.  Probably my biggest contribution was spending an entire Saturday cleaning and organizing the loading dock.  I also volunteered that year at Chaine d’ Or.  Crushpad was just too chaotic for us so the next year we moved our production to a facility in the Santa Cruz Mountains.  I volunteered again at Chaine d’Or.

That 2006 harvest was ok but Stefania and I were still interested in finding a better fit for us and our winemaking.  By pure chance I got a call from Bradley Brown at Big Basin Vineyards.  He was checking to see if I had any Grenache or Mourvedre to sell.  As we talked I told him I was looking for a new space in 2007 and he said he was looking for a new tenant.  We met and decided we’d move into Big Basin that year.  We were all set to move in September when we got the call that August to take over operations at Chaine d’Or.  I still kept the deal with Bradley and we made about 1/2 our 2007 and 2008 wines at Big Basin.

That’s where we met Ian Brand.  Ian was the assistant winemaker then at Big Basin.  He’s started at Bonny Doon and he had glamorous tasks at Big Basin like sorting grapes, cleaning bins and all the other things assistant winemakers do.  Ian and I spent a lot of time together on the sorting line and while cleaning things around the winery.  In 2009 Ian went out on his own to start Ian Brand Family Wines.  We stayed in close contact, talking at least once a month.  Ian asked for advice on getting started and he shared some grape sources with us (Split Rail and Coastview).  We sold Ian our old barrels we were no longer using and spare equipment when we had it.

Sometimes we’d have logistical nightmares of having to pick two vineyards on the same day that where 100 miles apart and Ian would step in and pick up the grapes from one of those vineyards and do the initial crush and fermentation for us.  We’d then go down with out barrels and press the wine into our barrels and haul them home.  He’s been a great friend and a great help to us over the years.

When we knew we would need a new home this year I didn’t think of asking anyone else but Ian.  I think he said “well I know you’re not an asshole, so no problem”, or something like that.  Ian built up a fantastic facility in Salinas.  It will be shorter for us to get to from our new home than the old drive was to Chaine d’Or.  We’re excited by that of course, but mostly we are really excited to be in the same facility with Ian again.  We will work under our own bond in what is called an ‘Alternating Proprietorship’ or AP.  That means we’re making the  wine and using the equipment.  We can hire his crew to do tasks like clean up and maintenance though and that will free up lots of time for us.

Ian makes great wine and if you haven’t tried it, search it out.  We’re so excited to be sharing space with him and so grateful for his generosity.