Friday Stefania and I drove up to San Francisco to taste our 2005 barrels.

It was a trip I was a little worried about. I have not been happy with the 05 Cabernet. It’s been a nice wine, easy to drink and I think would fall into the 82-84 point range. Not bad, but as Stefania has said “It’s a $10 wine.”

I couldn’t really afford to bottle and release a $10 bottle of wine, my production costs are in the $18 a bottle range. So, this was a make or break for the Cabernet. If it had not shown improvement, I was likely going to sell it on the ‘bulk’ wine market. I don’t want to release just ‘nice’ wines, I want them to be better than that. 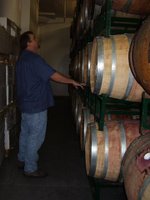 (searching for our barrels) 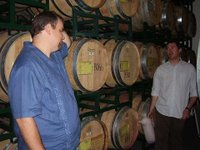 So we started the tasting with Dave Gifford who always guides us through the barrel room and takes down my instructions.

We started with the 2005 Eaglepoint Ranch Syrah. The wine had just been sulfured so we were expecting some reduction notes. Wow. This wine is turning out great. Some of the rustic edges from 3 months ago are smoothing out. It’s a dark, rich, layered wine. Lot’s of complex black fruit flavors and notes of black pepper. The 25% new oak adds some really nice sweet spice flavors without showing obvious oak. This was just what I’m after. It’s not a little Syrah, and I think it will be best after 3-5 years in bottle. I was very happy with this and I think people will really enjoy this wine. 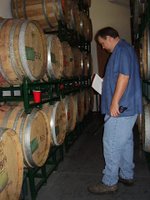 (Finding the Syrah, pipe in hand) 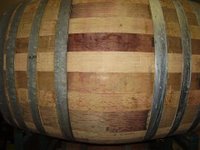 Then off we went to the Cabernet barrels. Stefania knew I was worried about these barrels so it was hushed as we tasted.

The first thing that surprised us was the change in color. This wine has gotten much-much darker in the past 3 months. It’s now a deep red. A dramatic change from the light red of June. The nose was much more pronounced. A green spice/currant note that is typical of young Cabernet, then lots of red juicy fruit. It also had nice notes of anise and cinnamon and much better length and depth. The 50% new oak had added a lot of backbone to the wine. 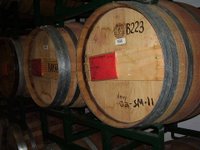 (The red labels mean we sourced these grapes ourselves, they are not ‘Crushpad grapes’) 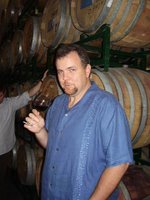 (tasting the Cab, notice the color!)

We then did a quick blend of about 5% Syrah with the Cabernet. That was the magic combo. The Cab got darker still with black fruit.

I left Dave with instructions to rack the Syrah. I want to avoid any reductive notes from getting in. I also told him to start topping off the Cab barrels with the Syrah. This should bring it up to about 3-4% Syrah at bottling, and and the color and black fruit the wine is short of now.

We then headed South to Bistro Elan in Palo Alto with some samples to share with friends and get some non-biased opinions from the wine manager there. The Syrah showed well, and the kitchen staff polished off the bottle! We showed the Cab last, waiting for feedback on our problem child. The verdict: “It’s a nice cab. Not too heavy, and with good red fruit. It needs a bit more color and some length and breadth of fruit, 88 points.” 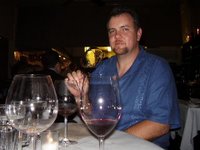 (tasting with food at Bistro Elan in Palo Alto)

I went home happy and finally not worrying about what to do with the Cabernet. 10 more months in barrel and the 3-4 % Syrah should add what it’s short on right now, and lift that 88 points to the 90+ range I’m after. I was feeling much better, that in a year the Cabernet will be drunk as quickly as the Syrah was that night.

I was very suprised to see 24 views in the profile page the other day. I thought, “Who is reading this, and I wish they’d leave a comment.”.

I started the blog early for our website. Mostly so our web guy could make sure the links worked and figured for a few weeks it would be me and Stefania reading it. well, me reading it and her correcting typos.

Well the website is now up. We haven’t announced it to anyone yet, we’re still in “beta test”. Correcting typos, loading up the pictures pages and generally getting it ready for public view. If you’ve come across this though also take a look at our site http://localhost/wordpress and let me know what you think, and any improvements I can make.

Call yourself a beta tester and let me know who you are!

Saturday we hosted a party for 25 people to celebrate finishing bird netting our vineyards, and finishing new hardwood flooring in our house. We wrapped up the flooring at 5 PM Friday and moved all the furniture back in place, including the bar.

This is the only time all year where there is really no labor to do in the vineyards. Once the netting goes on, we just wait and take measurements of sugar and taste the grapes until they are ready to harvest. That’s one reason August in vacation month in Europe. If you have vines, it’s the time of year you can be away from them.

The party got off to a little bit of a bumpy start when I cut my finger making anchovie bread. But friends Kenneth, Wes and Sissie stepped in and took over running the bar and opening the wine. I had smoked a pork butt and beef brisket for 24 hours over old wine barrel staves as the main course.

There was not really a wine theme for the party, just bring something good. Some of the highlights for me were 2003 Copain Syrah Garys’ Vineyard, 2003 Kathryn Kennedy Syrah Santa Cruz Mountains and 1987 Ridge Cabernet Santa Cruz Mountains. We opened 27 bottles total. People ended up hanging out in the cellar all night again.

I did get to sit and talk with some of our 20 something friends for a long time. First with Eric and Johanna and then Jessica and James.

One of the reasons Stefania and I like to have these big events is to be able to introduce people to different wines in a casual fun environment. Somewhere where it’s really easy to learn and ask questions while you enjoy yourself. Too many wine events are way too serious and intimidate people. We hope after people come to our parties they have confidence to say what they like and don’t like in wine.

Anyways; Eric, Johanna, James and Jessica all said how much they really liked being able to taste so many wines and learn so much at our parties. They also said how easy it’s made it for them to start drinking wine more on their own. Eric and Johanna have even started wine touring in Carmel and Napa.

That made my night. We’re making wine because we love to share wine with people and we think too many people treat wine and the ‘wine lifestyle’ too formally. We want our wines to be fun for people, and we want them to have fun when they drink them. It made me feel like we’re doing it right!

Day one of our Blog.

Today our web designer finished his first draft of our new website, so I’m finally forced to actually start our blog entries. I hope to keep a good update of this years harvest season and winemaking, which should be underway in just a few weeks.

It’s been a busy week on the winemaking front. We’ve had our notice up at home on the front door for two weeks now and the ABC came and did an inspection today of our office. Checking to make sure our permits were up and the posting was visible. I hope it went fine.

Our barrels are all getting marked as well this week and I exchanged messages with John at Hallcrest to make sure we are ready to go with the 15 or so barrels we’ll need this year. Mostly we are using old wood so I needed his help in rounding up good older barrels.

I also got the contract for Cabernet Sauvignon from Martin Ranch. We’ll be using that fruit with the Merlot and Cab from our vineyards to make a Santa Cruz Mountains Cabernet. That was the last grape source I needed to round up, so am really glad to have that done.