HomeGeneralFirst Racking of the 2008’s

Today we spent a full day in the winery racking and sulfuring our 2008 wines. We just received the lab reports back and the wines had all finished their malolactic fermentation. We inoculated all the lots with malolactic starter during fermentation. This process converts and softens the acidity in the wine.

In an older winery like Chaine d’Or we probably don’t need to inoculate. There is enough yeast present to start the process naturally. In fact we totally forgot to do the Elandrich lot and it started and finished on its own. Still it’s not something you want to risk. Because sulfur would stop the process, you can’t add any until it’s complete. This means the wine is unprotected from spoilage while it is going on.

That’s why we monitor it closely. As soon as it’s complete we want to get a good dose of sulfur in the wine to protect it. I’ve been following a trend that a few other winemakers have been doing lately of adding a larger dose now, with the hope I’ll have smaller doses later. I used to add 30-35 parts per million (ppm) now I add 50-60ppm. 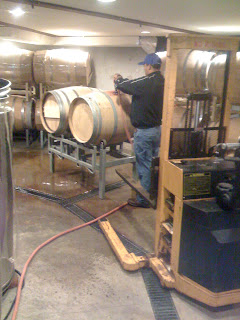 It’s the normal process for us. First we empty the barrels into a tank. We keep each lot separate of course. We add the sulfur in the middle of the process so that it can mix into the wine well. Once the barrels are empty we rinse them and clean out any gunk that has settled. 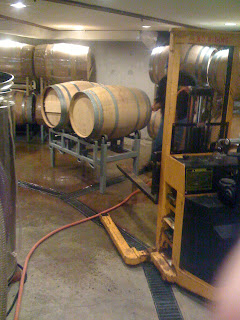 Jerry usually handles the barrel cleaning and mans the part of the hose that empties and fills the barrels. I move the barrels and man the tank connections. I also run the pump and put in the additions. Stefania prepares the additions and takes the readings then helps us with the hoses. Above Jerry is cleaning two barrels on a special rack that lets the barrels spin freely. 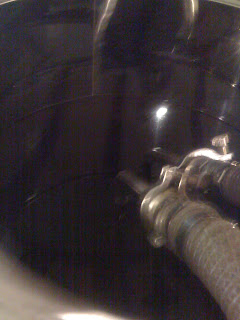 Above both hoses resting in a tank. This was the 2008 Chaine d’Or Estate Cabernet Sauvignon. The sulfur had been added and the barrels were still being cleaned. In other racking we’ll let the Cabernets settle for a couple days before returning them to barrels but on this first racking we go right back into barrel. We don’t have the tank space to store all the wines for 2 days and it’s more important to get sulfur on them and prevent bacteria or spoilage. 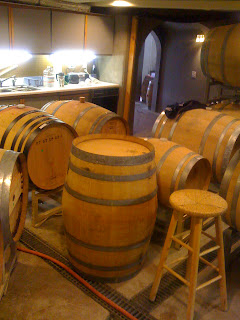 One of our great challenges is the small space we work in. Above you can see barrels spread everywhere. Some are empty, being stored for this year. Others have wine, and the standing upright barrel we use as a table. The drains on the floor take away all the water we use.
Everything went well. Only two minor problems. I over ran about a gallon of Pinot Noir and we had one barrel I wasn’t happy with so we switched that one out for a different barrel. We got to try the wines too. Notes on them tomorrow!