One of the things I wanted to do on this trip was see ‘fly over’ country from the ground. I’ve been across Nevada and Utah many times but never through the back country except for one trip up Hwy 95 to 168 with Stef in 2001. We decided to take 2 1/2 days getting back and stay off the interstate.

It would be a good time to travel in the desert as it was cool and there had been lots of recent rain which left everything green instead of brown. The first leg of the trip would be through the town of Santa Clara and up old hwy 91 through Gunlock to Vejo and Hwy 18. This was the only time we got lost on the trip, missing the turn to Gunlock and not knowing we were lost until we hit the ‘Welcome to Arizona’ sign about 9 miles past our turn.

An interesting thing about Santa Clara was that many of the yards in town had grapes growing. We guessed they were not wine grapes but probably planted for jelly making by the early Mormon settlers in the area.

Once we got on the right route to Gunlock we came across this rare sight of the Gunlock Falls. 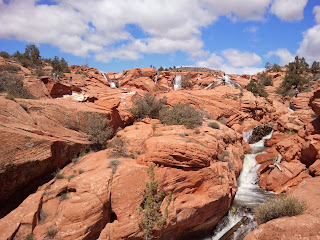 Stef and I hiked down off the road and up the falls away to take these pictures. 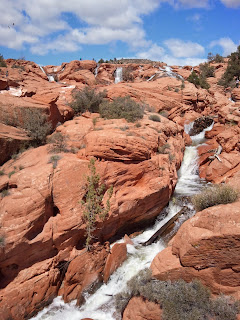 We heard many of the locals hiking the falls that day and on the road say they had never seen them flowing. The reservoir was full and the falls serve as an overflow. It’s been a very wet year in the west. 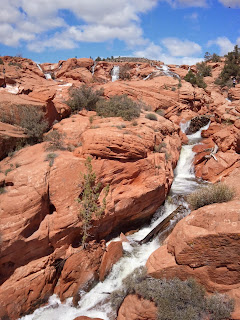 From Gunlock we continued on hwy 18 through Enterprise and to hwy 56. This is ‘Crop Circle’ territory. When you fly over the desert and see the giant round circles and wonder who in the world is farming out there? This is the place, Western Utah, and every farm seemed to be owned by someone from the ‘Holt’ family.

As we entered Nevada hwy 56 became hwy 319. We turned in the town of Panaca north on to hwy 93, the ‘Great Basin Highway’. Other than the town of Ely, which I would guess has 4000-5000 residents each town we’d go through was no more than a few hundred people. Some that showed on the map would turn out to be modern ghost towns, with 10-15 empty buildings and just 3-4 occupied.

At the hwy 93 turn we stopped at Cathedral Gorge for some more hiking and picture taking. 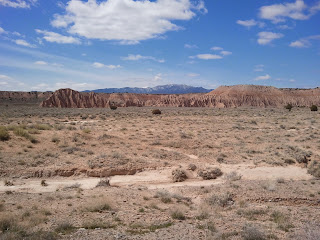 We’d hike up to the little overlook below only to find out you can access it from the highway. There are hundred of little caves in the sandstone and original facilities built by the CCC in the 1930’s. 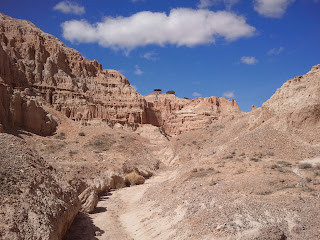 On Sunday we saw more elk, deer, antelope and a golden eagle among the highlights. 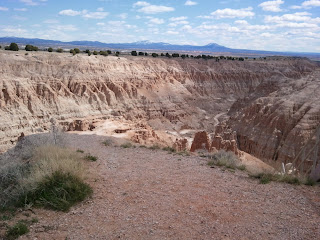 Sunday night we stopped in the Hotel Nevada in Ely and had dinner at the Jailhouse Restaurant. This is completely Chevy Chase/Vacation movie stuff. We stayed in the Micky Rooney room at the hotel. Each room is named after a star who once stayed in the hotel.

Monday we headed west on hwy 50, ‘The Loneliest Road in America’. I didn’t take pictures as we went that day, just enjoying all the mountain passes covered with snow as we went through them and more deer, antelope, wild horses and wildlife. The entire time from leaving St George in Utah, until arriving in Fallon Nevada I would pass just two cars and be passed twice also.

The highlight of day two came about 90 miles outside of Austin Nevada, a town marked with a large hand painted ‘Speed Trap Ahead’ sign. As we rounded a large turn Stefania said; “Why are there so many cows moving along the hill?” As we cleared the turn right along the road there were five cowboys moving the cattle on horse back. I know this is a rare sight. In New Mexico when my uncles moved cattle, horses where mostly brought just for nostalgia. Most of the work was done with trucks and ATV’s. I always felt like the horses came out just so the kids from California could ride them and I always looked like Billy Crystal in ‘City Slickers’ with sneakers and a ball cap. There were no trucks or ATV’s in sight though.

We arrived in Tahoe about 3PM and I had reserved us a room in the Marriot Timber Lodge with a full kitchen. Stef and I cooked dinner that night and enjoyed the luxury. The next morning we continued on hwy 50, then 5, 580, 680 and 87 to home. We arrived back at 2:30 PM with 1527.6 miles behind us. 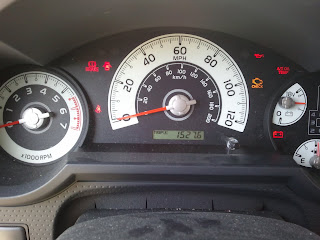