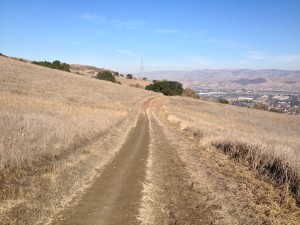 In blogs and release letters I’ve often talked about the red volcanic soil that we have in a few of our vineyards.  It really does not happen in the Santa Cruz Mountains very often.  On the west side of the mountains the soils are mainly sandy and sandstone based, that’s part of why I think the wines there can be light in color.  On the east side of the mountains the soils are clay and fractured limestone.  Every now and then though there’s a rare streak of red volcanic soil.

This is actually much more common in the band of foothills to the east of the Santa Cruz Mountains proper.  In the southern part of the range those foothills are called the Santa Teresa Foothills and our Crimson Clover vineyard is in that chain.  There’s some of that red volcanic soil at Crimson Clover and I’ve always thought that was a key to the high quality of the site.

Our Pinot Noir vineyard is on a knoll of red volcanic soil in the northern part of the foothill chain.  So far the wine from that site have been unusually dark and tannic for Pinot Noir.  I think that’s the soil in play.  I love this soil and wish we could find more sites with it.

Just before Christmas Stefania and I went on a seven mile hike in Santa Teresa Park, which surrounds the highest peek in the foothills.  That peak is called Coyote peak and is just over 1100 feet.  Our hike took us from the base of the hills at 90 feet to the peak.  Along the way there’s an old horse ranch and I took this photo of an old barn.

On the way back down we took the trail below and I thought this was a great shot of just how rare and elusive the red soil of the Santa Teresa Hills is.  In the foreground the trail is dark brown.  This is a heavy clay soil we have in the valley floor below.  It turns black when it’s wet and holds a lot of water.  Our Mourvedre in the yard at home loves this soil but Syrah has never really done well in it.

Half way down the trail though you see the color of the trail change.  That’s not the lighting, that’s a band of red volcanic soil.  You can even see the little raise in the hill where the lava once flowed.  The band lasted for about 70 yards on the trail and then was back to black clay.  The photo will enlarge if you want a bigger view of it.  Next time we’re in the park I’ll take a close up of the transition.  It’s pretty dramatic.