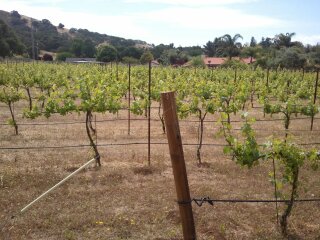 Saturday morning we headed to the vineyards south of us outside of the town of Morgan Hill. That includes the Crimson Clover vineyard, source of our very popular single vineyard Cabernet. The vineyard had a little drama earlier with the gates being open and some deer damage. It looked though like the damage was limited to about 20 plants.

The view above is from the top of the vineyard out across the valley. It looks like we’ll need to do a new fertilizer sprays on the vines soon to make up for some low nitrogen. I’ve gotten to prefer using teas and sprays on the leafs to ground applications. I think the uptake is better with less waste. Fruit set looks low again this year. The wind in the little valley helps limit vigor and we usually get just about one to two tons of fruit per acre.

Our second stop was at the Peacock vineyard south of the city of Morgan Hill. This vineyard is doing very, very well. It will need to be thinned and suckered still, but overall looked really great. There is much more fruit than we figured the site could produce in its fourth year. A real rough guess at this time is about 1800-2400 pounds.

The owners were not 100% sure what they had in the vineyard. They thought it was Cabernet Franc, but also thought it might be Zinfandel as the crew lead who installed the vineyard told them Zinfandel. We’re 99% sure right now it’s Cabernet Franc and not Zinfandel. The leaf is wrong for Zin. We’ve only handled a little Cab Franc though in the past, just about 20 plants, so I won’t be 100% sure until we see some fruit bunches.

Cabernet Franc is an earlier grape to get ripe. There is already good flowering here and it would not surprise me to have this be the second vineyard we harvest this year. Maybe as early as September 15th or so. I’ll have to redo some winemaking plans for the year. We figured on 700-1000 pounds based on the 300 that were harvested last year. I had just planned to add that to the Haut Tubee.

With the potential though for up to 2400 pounds we could make three barrels of Cab Franc. I will replan to ferment and age this wine on its own if we can get three barrels. If it holds up we may release it as a single vineyard wine. I think more likely though is that we will use it to blend out some other wines. We can add up to 15% to our Santa Cruz Mountains Cabernet Sauvignon and that wine always benefits from having some Merlot or Cab Franc to round it out and soften it. We may also consider a Santa Clara Valley Cabernet Sauvignon blend as a new wine. That would include fruit from a few new sources. There’s also the very good chance that it will go into the Haut Tubee though and I suspect at least some will go into the Haut Tubee.