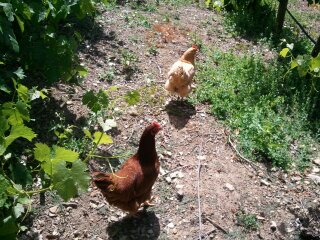 Every Memorial Day weekend Stefania and I go out and visit each vineyard and inspect it in detail.  We do this so we can plan out the work that needs to be done over the next six to eight weeks.  It really helps to see all the vineyard in a short time to see how they are doing relative to the others.

Our first stop was the ‘Church’.  Just 20 vines at Santa Teresa Church that we take care of.  The vines have started to flower as you can see below.  This is the process of the hard green grapes getting pollen on themselves and turning to real grapes.  This is a sensitive time in the vineyard and if the vines shake too much the flowers will fail in their efforts and the resulting clusters will have ‘shatter’.

Stefania did clean up some suckers in the little vineyard and tucked up the growth in the wires.

After a short stop at a wine store that wanted to try our wine we headed up to the Mount Eden area of Saratoga to inspect our vineyard there.  This is a view across the little valley from our location.  The vineyards on the far left are Mount Eden and Peter Martin Ray.   In the center is Copper Garrod – Francville, George’s, Lone Oak and Valley View. To the far right is Kathryn Kennedy.

This is the view down the vineyard looking out at the Santa Clara Valley and downtown San Jose.  The vineyard looked in pretty good shape. We need to handle a gopher outbreak and the vines need suckering and tucking, but that’s what we expect in June.  There were no signs of mildew and the Cabernet was just starting to flower.

It’s a good hike to the bottom of the vineyard and back, probably a 150 foot drop.  The rows look really nice though and will look even better once we get everything tucked up.  One thing I’ve learned over the years is it is better to single task a crew rather than trying to do many things at once.  So here we’ll start by sending out Jerry to weedwhack under the rows.  Then we’ll send out a little crew to sucker the vines.  Finally we’ll do thinning and tucking in another effort.  I’ve found that if you have a crew out trying to do all those things at once, none of them really get done perfectly.  It’s better to do one at a time, do it once, and do it right.

Next we checked on a little 40 plant Merlot vineyard outside of downtown Los Gatos we just took on.   As I was inspecting the plants I heard a noise behind me.  I went; “what the f… is that?”   I turned around and this little hen was pecking at my leg.

We hadn’t had a name for this vineyard yet.  We’d just been calling it the ‘Los Gatos’ vineyard.   Now though we’ll call it the “Red Hen Vineyard”.

Stef loves chickens.  She had to play with these ones as we cleaned up the vineyard.  Stefania and I will go back and do the suckering, thinning and tucking here on our own.  No sense sending the crew for 40 plants.  We’ll have some after pictures soon to see the changes that happen as a vineyard is cleaned up in June.

Our final stop was at the Gurr vineyard in suburban San Jose.  There are about 40 Syrah and Zinfandel vines here that go into the Haut Tubee blend each year.  There’s a new house under construction in the background.

Today we will go out and check on the southern vineyards and have pictures of those tomorrow.