Last Saturday we held our Spring Open House. Usually we send out an announcement to everyone on our mailing list within the Bay Area. This year though we had rain the entire week before the open house and one day in particular that Jerry said was the most rain he’d ever seen in a 24 hour period.

The net result was that the little field we usually use for parking was too wet to mow and too soft to park in. We decided rather than trying to do traffic control on the street, or worse have to tow cars out of the mud, we’d cut back on the email invites and just send them to people who had checked off ‘hold for pick up’ on their order forms.

This gave us a small group of visitors and a much more low key event. The first picture I took was for some people on the Wine Spectator forum. There was a question about ‘gunk’ in wine and I thought I’d take a picture of some Syrah we have in a carboy. This is the net result of letting 5 gallons of gross lees settle for a few months. The lees are on the bottom and the wine is on the top. 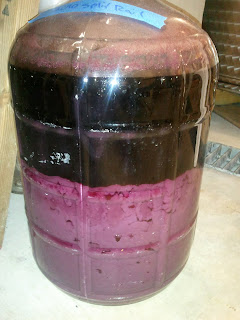 Now a better picture of our hostess with a bottle of wine in the cellar getting ready for visitors. 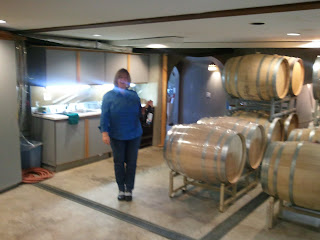 Here is our little low key tasting table. I actually forget sometimes I’m supposed to do the pouring and tend to think people will just help themselves. Not your normal tasting room experience I’m sure. I was feeling like celebrating the opening of a new Chavez Supermarket near our home so the treat were chips, red salsa, nopales salsa and queso fresco. 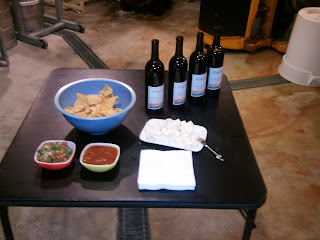 The Uvas Creek was best after being open about an hour. I think that means it’s almost out of the odd stage that this bottling has always gone through from age 3 to 4. If you want to open one over the next few months I’d decant it for about an hour to let the cherry fruit open up. Right out of the bottle the fruit is a little muted but with air it comes back around. I saw this in the 05 and 06 also at about the same age so I think it’s something with the aging profile of this particular vineyard.