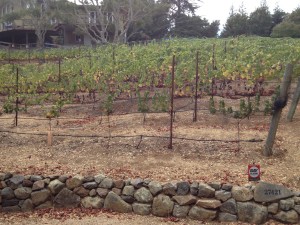 It’s the time of year to start checking on all our vineyards for sugar readings and ripeness.  We think everything will be on the early side.  Maybe a week eariler than last year, which would be four weeks ahead of 2011 and 3 weeks ahead of 2010.  Right now this year reminds me of 2009 or maybe 2007.  Our first vineyard we’ll pick is the Under a Lucky Star vineyard in Los Altos Hills.

Like most of our vineyards it’s on a steep hill.  The steps below are on the right of the vineyard and go from the bottom to the top.  It’s the best way to enter the rows.  I took the picture though to show the red volcanic soil.  This soil type is pretty rare in the Santa Cruz Mountains and Santa Teresa Foothills.  Most of the soil is lift thrust from earthquake activity.  There is a small band though of volcanic soils, usually to the west of the San Andres fault.  The Crimson Clover vineyard has a band of this soul that covers about 30% of the vineyard.  The Lucky Star vineyard though is 100% red volcanic soil.

I love this soil and wish we had more grapes planted on it.  The best grapes from Crimson Clover come off this soil.  It brings out lots of bright and intense fruit and super dark color.  So far the Pinots we’ve made from Lucky Star would fool most lovers of Santa Cruz Mountains wines.  They have the flavor profiles of the Santa Cruz Mountains but the fruit is more intense and the wines much darker.  Pinots from the southern and eastern side of the mountains, where the soil is sandy, can almost look like a Rose.  On this soil though the wines get very dark.

The vineyard is just about ready and I think we’ll be picking on August 31st or September 1st.  About 5 days ahead of last year.  This site is always our first and always 1-3 weeks ahead of Pinot from the eastern sides of the mountains.  Because the vineyard is so steep we’ll use our regular ‘A’ team of pickers with Millie, Stefania and I helping out.  This vineyard is just to dangerous for inexperienced helpers.  Usually for people who want to come out and help we invite them to the Crimson Clover vineyard which is mostly flat and has lots of shade around the vineyard.

Brix was at 21.1 on Saturday and we’ll pick at between 23 and 24.  The flavors are not ready yet.  Stef said the grapes taste ‘plain’ still.  It will take the additional few weeks to get more fruit flavors to develop.  Yields look about the same as last year.  This is a vineyard we’re still doing some recovery work on so we think yields will stay low for another year or maybe two as we strengthen and retrain the plants.  When that work is complete the vineyard will yield 1500-2000 pounds a year or about two barrels.  Right now it’s getting about 800-1000 pounds or one barrel.