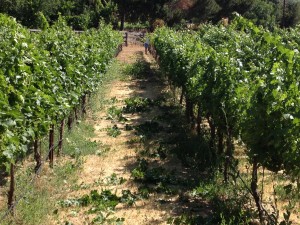 These are actually pictures from about a month ago.  We generally let the vineyard get a little crazy in the late spring and early summer.  We’re trying to not touch them while flowering and fruit set is going on so we don’t disturb that process.  I also like that at this stage the young fruit is protected from the direct sun if we have a heat wave.  In the picture below you can see Stefania at the back of the row.  Millie, Stefania and I went out to do the tucking

It has been a good year for vine growth so things at Crimson Clover where the thickest we’ve seen then since 2009.  The objective here is to remove any extra shoots and then get the vines tucked up into the wires.  We also cut off any really long tops on shoots.

We accomplish a lot with this effort.  The plant can then focus on getting fruit ripe and not on growing extra shoots.  The maturing fruit will also get more sunlight now.  This also let’s us see if there was any mildew present and treat it.  There was not as we’ve had a pretty easy/good spraying schedule this year.  The final thing this does is get the vineyard ready to put on bird nets

At Crimson Clover the process goes pretty easy as we have movable wires.  You move down the row and pull both sets of wires off the trellis stakes.  One person then lifts the lower wire and places it just above the fruit zone.  Once this is complete you go back and take the second wire and raise it to the height of the growth.  In this case we were raising it to the very top.  The other two people then follow behind and tuck and cut anything loose.  The hardest part is removing the wire since the vine wants to attach to wire.

When it’s all done you have nice clean rows.  Millie came back a few days later and cleaned up the last of the weeds under the rows with a weedwhacker and we were already for netting.