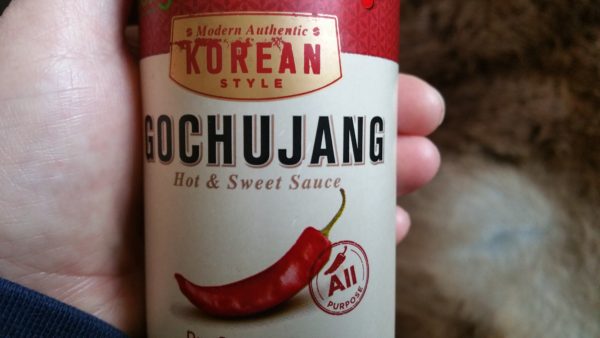 In order, stale leftover popcorn that has been resurrected with melted caramel candies, then bourbon balls coated in cocoa and white chocolate, and Paul stir frying leftover protein and veggies for us.

Not that this is typical of how we spend our weekends after pouring in the tasting room and visiting with you, but yeah, pretty much it is.

The photo of the Gochujang was from a newsletter email I sent out with the recipe for my dads “Famous Korean Short Ribs”.  This sweet and spicy sauce was his “secret” ingredient and he loved using it often. I think some of his favorite meals were inspired by his service time spent in Asia.

The bourbon balls recipe came out of an issue of Imbibe Magazine and it turns out they are crazy easy to make and unholy to eat before they have mellowed for at least a couple of hours.  [For the record, all of these photos are from January 2018] 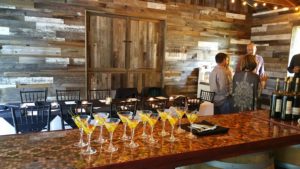 Warm Glow From Inside

Paul and the staff going over the pouring menu.  Note the very cool vintage stove in the back.

We hosted a sit down wine tasting dinner for 10 in the new space last September.

We had The Milias Restaurant cater the meal and Paul came up with a great wine menu featuring nine of our Cabernets.

And that concludes the tasting room overhaul and first few blogs of 2019.

I made it! And it wasn’t too painful. If I felt like spending more time on wordpress trying to figure it out I would but Paul keeps saying he’s changing blog and website platforms again so I haven’t invested the time in learning.  So, for now, you’ll have to put up with junky formatting and awkard photo to text placement, I’ve tried altering it with no luck. I’m calling it Artsy. 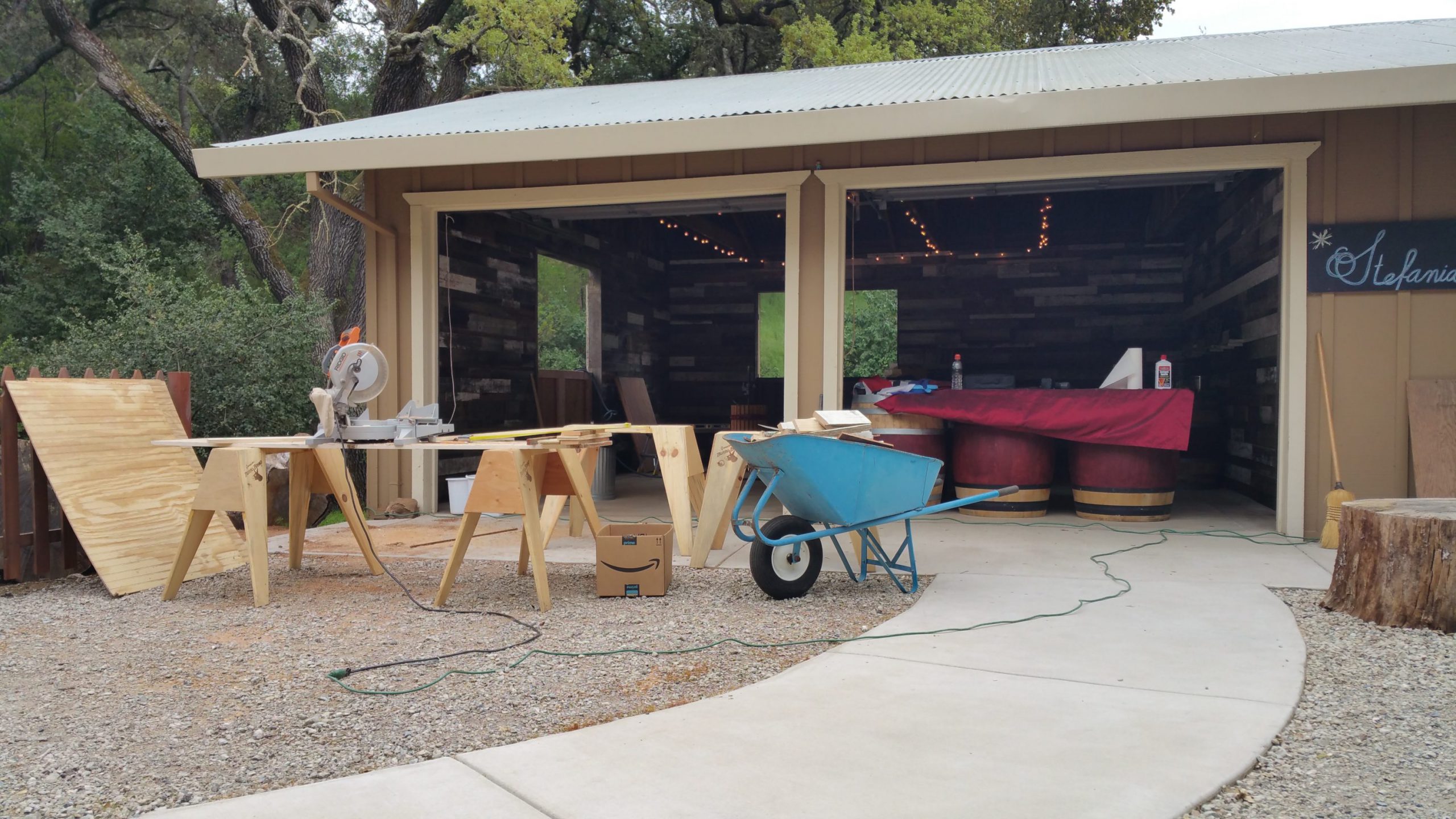 The saga continues as the machinist and grape-stomper keep at it.

South wall Dutch Door construction. The objective here is crossflow ventilation, a view out the back to the hillside and eventually a deck we can step out onto and expand the seating area to the sunny side of the structure in the cooler months.

East wall Dutch Door getting it’s reclaimed wood treatment. Most of the pieces of wood were old fence boards, fence rails, and otherwise less than desirable scraps headed to the burn pile or landfill.  I helped Paul trim, rip, and sort by size.

Exterior East Wall. The only place we could find the hinge hardware that suited the structure was on amazon. They really do have everything.  I need to find one more door photo for this post and then we can wrap up the next blog with some finished construction photos.  I’d like to track down a family kodak moment too if I can and include it.

While Paul was trimming out the dutch doors, Dan set himself up working on the swinging saloon doors. So far we’ve been able to keep the piece of lichen intact but eventually it will drop off and we’re already seeing wear and tear on the paint. 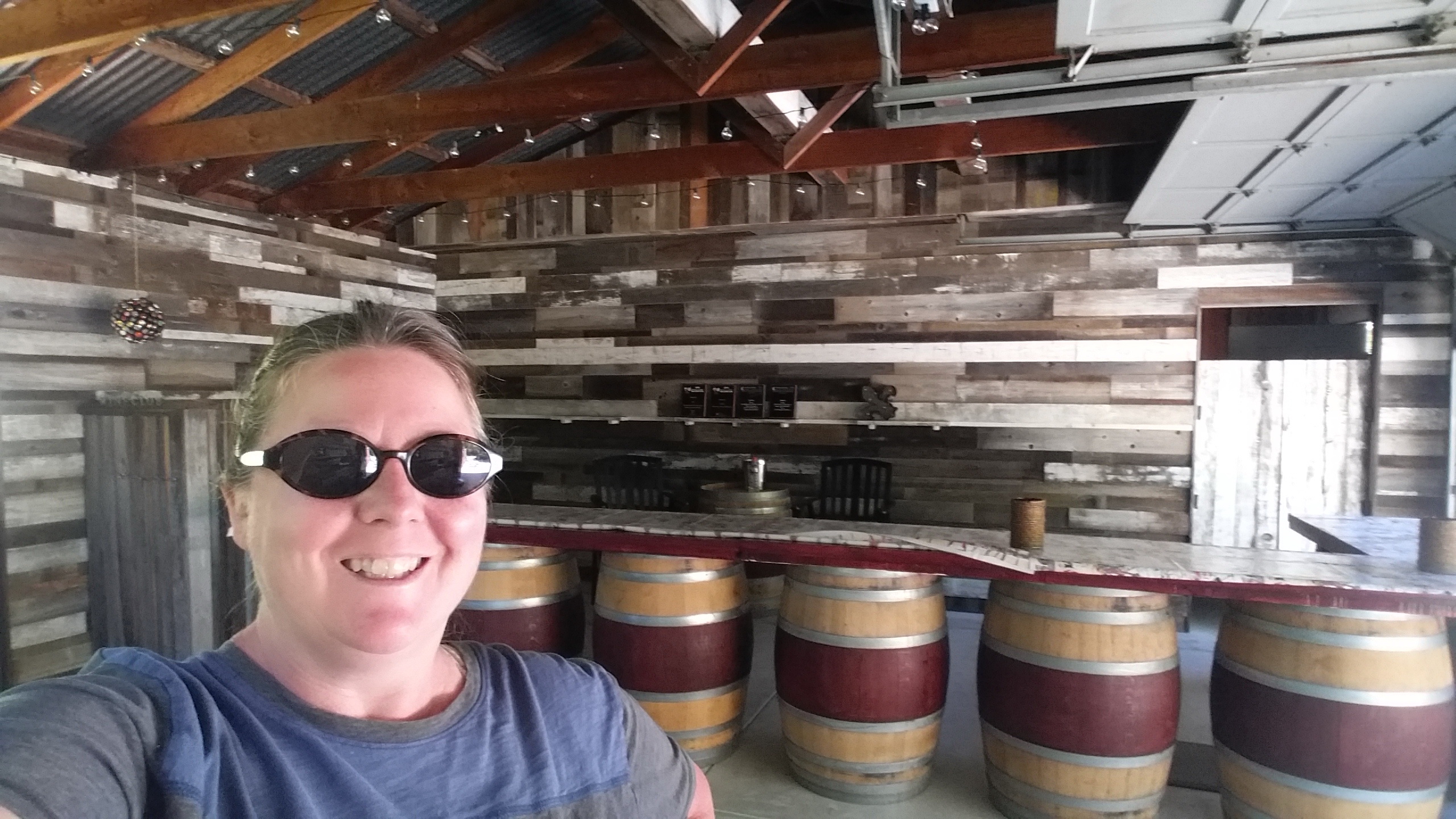 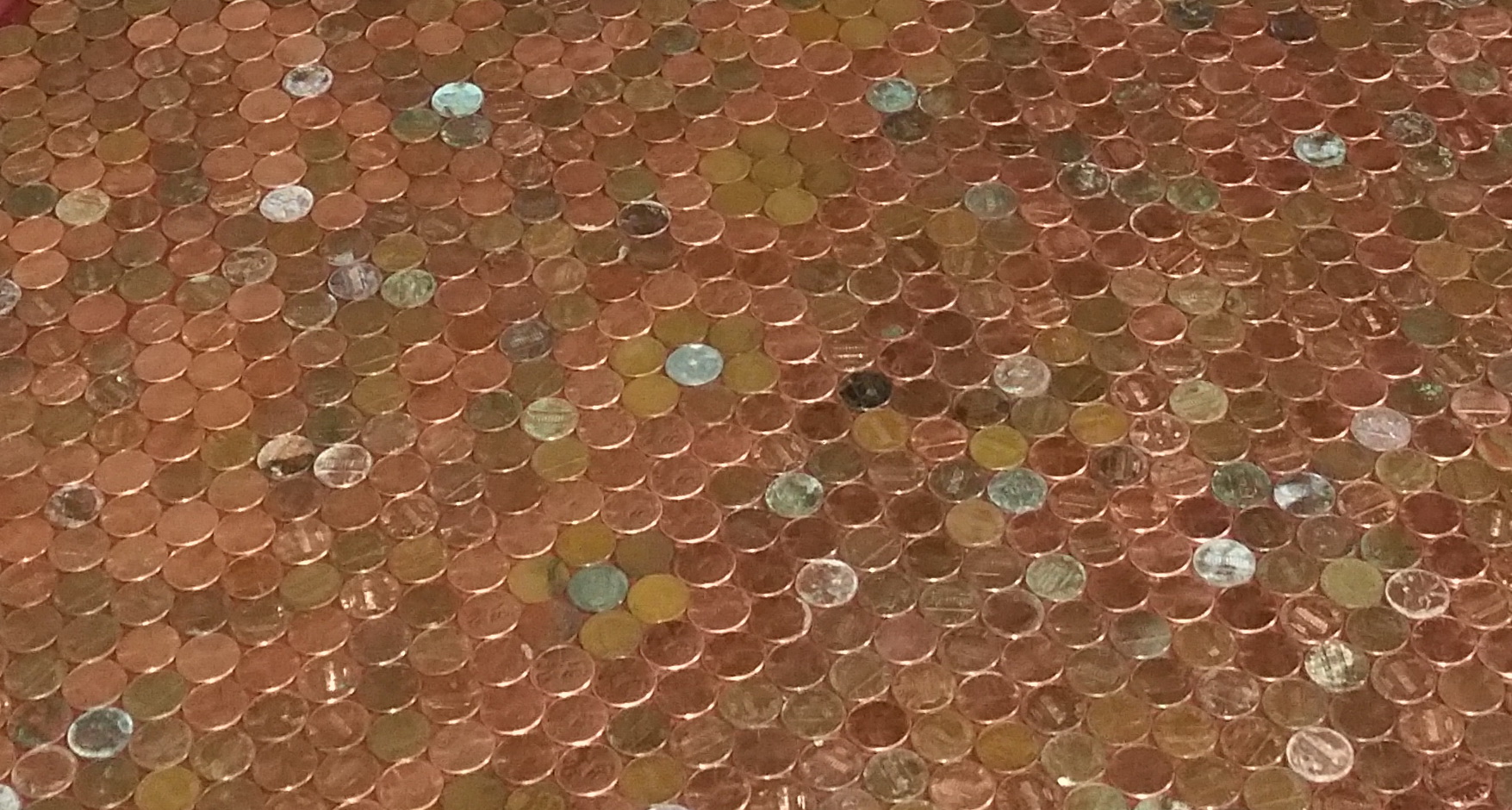 Alternate Title: How Paul Spent His Second “Sabbatical” After the HP Lay Offs

When we moved to Gilroy in 2014, the second garage (shown here) was open stud construction, with one wall separating the two car garage side from a large sized storage room. Each side of the building had a window. Pretty basic construction, built in the 70’s without a permit, more on that as the story develops, and a tin roof.

With the help from Dan the neighbor, a retired machinist, they managed to turn a basic structure into a super cool space.  In the mean time, I took my brother Mike’s coin collection and turned them into cool epoxy top counters. 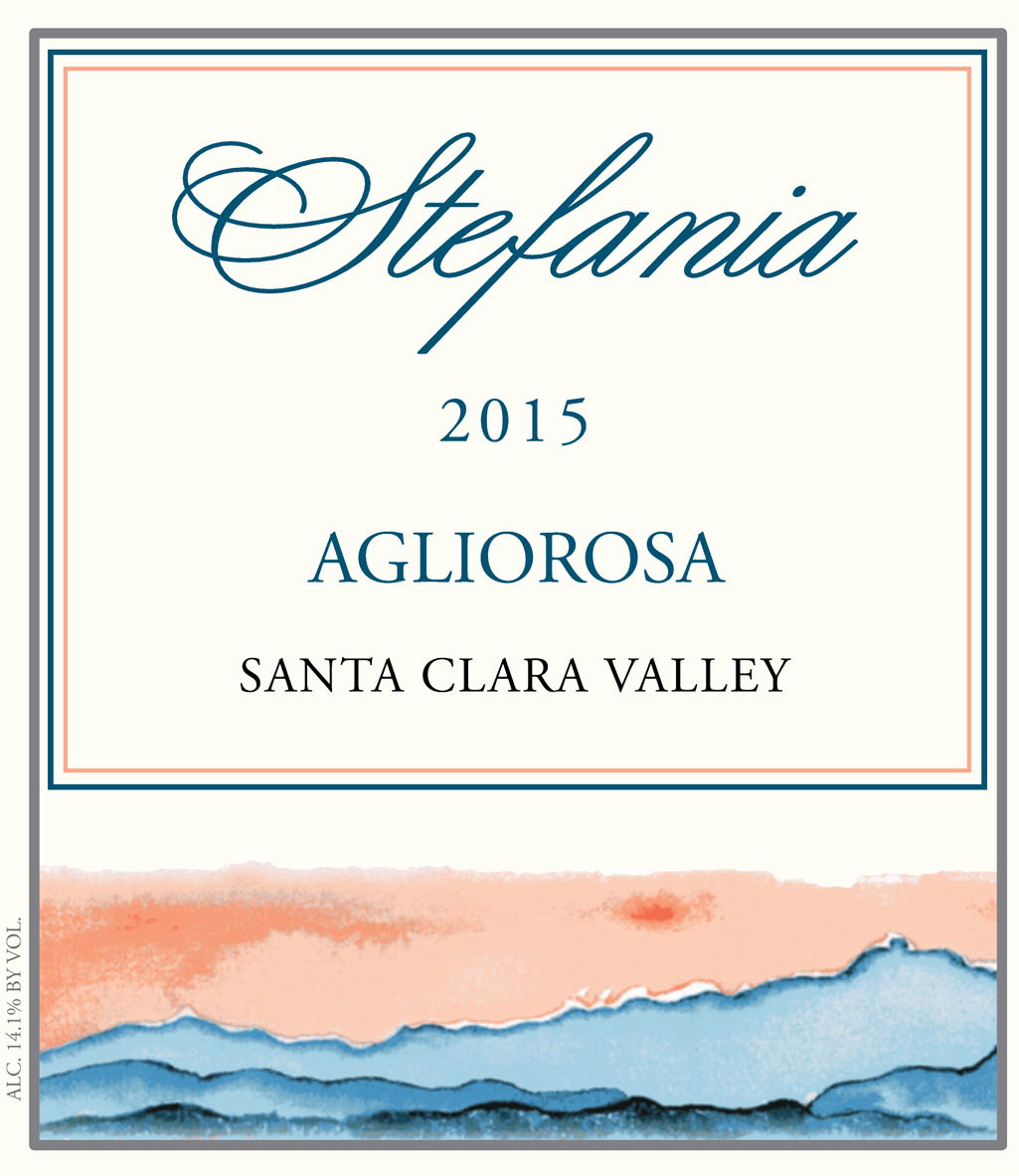 Based on the last time we put anything up you would think so. It’s been well over two years since the last blog. How is that possible? We have so much to tell you and get caught up on!

Tonights post is basically meant to make sure I remember my user Id and password, and also how this wordpress thing works.

Photos from last year and commentary are in the queue, no really, I’m working on them now while I watch the Seahawks and Cowboys. Oh alright, I’m not really working on them right now, but I will be soon, very soon.

We had an impressive downpour earlier today while there were guests in the tasting room. I’m thrilled we have rain and clouds, means we’re done with freezing overnight temperatures for awhile. I’m hopeful the citrus trees survived the last week of cold. Of all the things I miss from the old house in San Jose, the margarita grove is number one. The mature lemon, lime, and blood orange trees were awesome and well pretty much I’m just rambling. Go Seahawks, but more importantly, Go SAINTS!!! 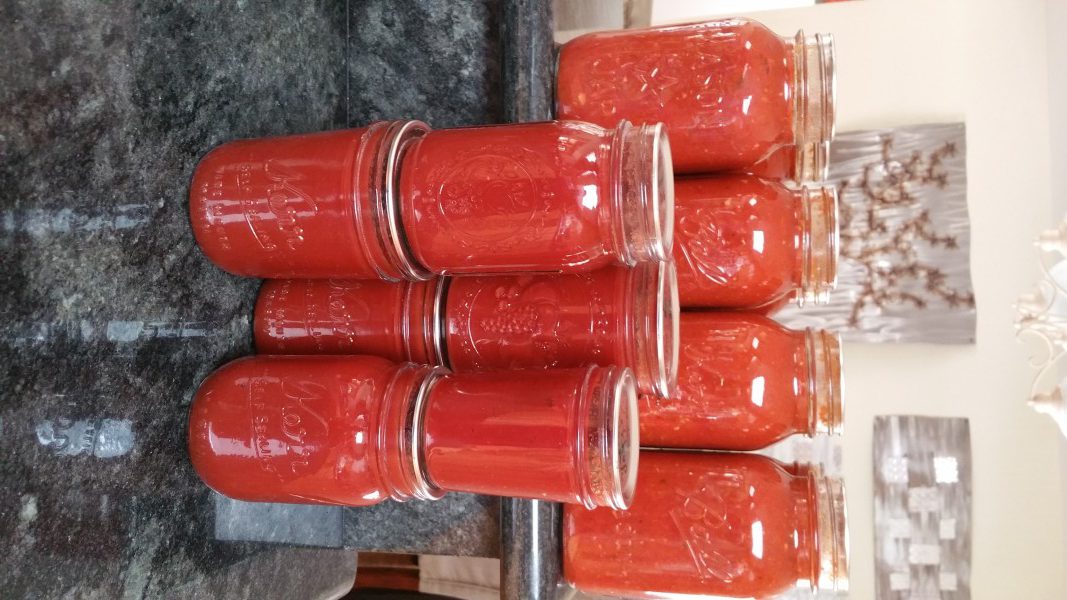 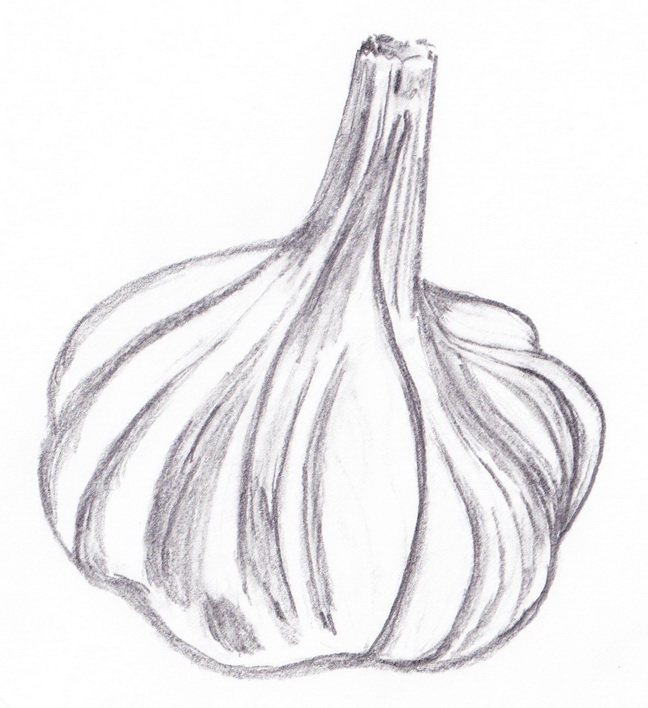 Our property, poorly aligned on a blind turn is like a magnet:

The driver of this car fell asleep at the wheel and failed to negotiate the turn.

The good news is that the barriers Paul installed worked perfectly. (and no one was injured)

The posts stopped the car and deflected it away from the residence and tasting room.

The bad news is it took Braccos nearly an hour to hoist the car off the posts and save the olive tree.

After 13 weeks of waiting for my propane tank cover, I finally have my custom “rock”!  I’m thrilled to have this eyesore camouflaged so that the tasting room garden and surrounding area is more photogenic.  Now if only I could keep people from crashing into things….teaser for the next blog.

An assortment of photos from life on Day Road.  Paul’s garden with a couple of different crops (scroll down for the winter garden), a rare moment when he was handling the two tasting room supervisors (Breesie left and Drew right), the first grape vine shoots on the Thompsons, our 8 year old neighbor drove the tractor-mower combo over to us, first rose bloom of the season with a wagon wheel followed by newborn kid and then a mama cow on a hike we took over at Harvey Bear park.  Then some turkeys showed up in the driveway early one morning carrying on, then the winter garden photo, the pink blossoms are from the back side of the Home Depot here in town, I was in the lumber section of the store and happened to catch the view out the bays, spectacular. On the drive over to Home Depot was the mustard blooming in a walnut orchard.  Obviously I’m behind and playing catch up with photos.